About Warwick Railway Memorial Honour Board

Book Direct with the Owner at Warwick Railway Memorial Honour Board with Attractions in Warwick, for all your Attraction and travel needs.

A solid marble honour board at Warwick Railway Station notes the contribution of 101 local railway workers who enlisted in WWI - seven of them dying in the conflict. They were among more than 3,000 Queensland railway workers who enlisted. Some went on to help run railways in France during WWI. The Commissioner of Railways JW Davidson unveiled the honour board, featuring a relief of a train, on 13 February 1922. Warwick Railway Station, a large complex with a range of buildings and structures, became the area's main station in 1885, following the extension of the railway to the New South Wales' border from Stanthorpe. The station became the backdrop of a national incident in November 1917 when Prime Minister WM (Billy) Hughes, standing on the platform spruiking conscription, was egged. That action also led to the appointment of a Commonwealth Police Officer at major Queensland towns. 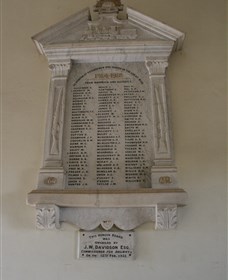 Attractions welcomes Warwick Railway Memorial Honour Board in Warwick QLD, we offer an experience that takes you on a journey of a life time in Warwick. For all your attraction and things to do, book your adventure today.

Is Warwick Railway Memorial Honour Board in Warwick your property on Attractions, please claim your listing and subscribe to update your contact details and receive your phone calls and emails from your clients.