Book Direct with the Owner at Edward 'Teddy' Sheean Memorial And Sheean Walk with Attractions in Latrobe, for all your Attraction and travel needs.

The Edward 'Teddy' Sheean Memorial and Sheean Walk is a military memorial at Latrobe, north west Tasmania. Latrobe is 10 minutes' drive south east of Devonport (nine kilometres/six miles). The Walkway begins in Latrobe's main street, where you can see the Edward 'Teddy' Sheean Memorial, commemorating the courage and sacrifice of this young seaman. Born near Latrobe in 1923, Edward 'Teddy' Sheean served aboard the HMAS Armidale during the Second World War. While en route to Timor in 1942 the Armidale was attacked from the air and destroyed. Although seriously wounded, Teddy Sheean manned an anti-aircraft gun in defence of the Armidale's survivors, remaining at the gun as the ship sank and sacrificing his life to save his shipmates. Teddy was posthumously Mentioned in Despatches, second only to a posthumous Victoria Cross. A Collins Class Submarine has since been named after him - the first Australian warship to be named for a Junior Sailor of the Royal Australian Navy. You can follow the Sheean Walk from central Latrobe to its conclusion at Bell's Parade. Plaques placed along the route commemorate the actions of Australian soldiers who fought in World War II and in the Malaya, Borneo, Vietnam and Korean conflicts. 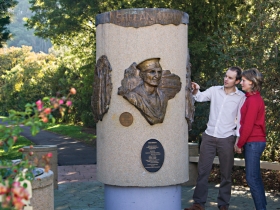 Attractions welcomes Edward 'Teddy' Sheean Memorial And Sheean Walk in Latrobe TAS, we offer an experience that takes you on a journey of a life time in Latrobe. For all your attraction and things to do, book your adventure today.

Is Edward 'Teddy' Sheean Memorial And Sheean Walk in Latrobe your property on Attractions, please claim your listing and subscribe to update your contact details and receive your phone calls and emails from your clients.