Book Direct with the Owner at Shoalwater Islands Marine Park with Attractions in Rockingham, for all your Attraction and travel needs.

Pristine Islands, reefs and ship wrecks make for excellent diving, snorkelling and wildlife watching in the Shoalwater Islands Marine Park off the coast south of Perth. At Penguin Island, Little Penguins breed in the burrows - watch them being fed at the interactive centre. The island is also home to breeding colonies of silver gulls, fairy terns, bridled terns and Caspian terns. The reefs surrounding the islands provide good snorkelling and diving and abound in marine life including sea stars, urchins and molluscs as well as a number of fish species. Take to the water here and you'll probably run in to a pod of bottlenose dolphins which are extremely common in the marine park. You can go swimming with dolphins on tours which operate regularly. Seal Island is home to a colony of rare Australian sea lions which can often be seen fishing and swimming in nearby waters. Shoalwater Islands Marine Park is also home to the Saxon Ranger, a 400 tonne former fishing vessel - the first purpose sunk dive wreck in the Perth metropolitan area. Dive permits are required. Shoalwater Islands Marine Park is accessible from Rockingham which is less than an hour's drive south of Perth. 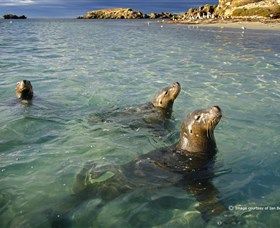 Attractions welcomes Shoalwater Islands Marine Park in Rockingham WA, we offer an experience that takes you on a journey of a life time in Rockingham. For all your attraction and things to do, book your adventure today.

Is Shoalwater Islands Marine Park in Rockingham your property on Attractions, please claim your listing and subscribe to update your contact details and receive your phone calls and emails from your clients.