Book Direct with the Owner at Hayden Orpheum Picture Palace with Attractions in Cremorne Point, for all your Attraction and travel needs.

The Hayden Orpheum at Cremorne began life as The Orpheum on October 3, 1935.

It was, at the time, a much grander movie theatre than most suburban movie houses, and for many years made the clumsily-worded boast of being “Sydney’s only suburban city movie theatre”. The justification for this claim was that it was built as a theatre, and could screen films or live cast musicals for its 1735 seats, over two levels.

Backstage there were dressing rooms, an orchestra pit, and a functioning fly-tower to store and ‘fly’ scenery. It was a proper ‘legit’ stage and played host to the Australian ballet etc.

The theatre remained intact, albeit very run down, until it was bought by commercial property developers. Despite the protests of some theatre supporters, it was savagely ripped apart, and a second-rate shopping arcade and a health gymnasium installed. A concrete slab was installed horizontally, and the only part of the theatre that remained above it was the decaying art deco ceiling and parts of the proscenium. It was virtually inaccessible to all - apart from the pigeons who made it their home. 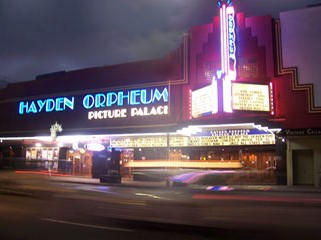 Attractions welcomes Hayden Orpheum Picture Palace in Cremorne Point NSW, we offer an experience that takes you on a journey of a life time in Cremorne Point. For all your attraction and things to do, book your adventure today.

Is Hayden Orpheum Picture Palace in Cremorne Point your property on Attractions, please claim your listing and subscribe to update your contact details and receive your phone calls and emails from your clients.